Praise to The Man 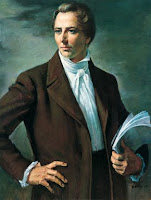 Early on, my study of the Gospel began as a study of the life of Joseph Smith. The first book I read was called "Journal of Joseph". It was basically an abridged version of the first few volumes of the History of the Church set. It helped me to see him as a person, as someone real and genuine. I've always enjoyed studying his life and teachings.

Whether or not the work he performed was true, I have a very deep and sure testimony that Joseph Smith believed the work was true. There was no conspiracy or design to fool anyone into believing he was a prophet. There was only a man who truly believed he was called of God, and suffered from that time until the end of his life testifying of that calling. There isn't a single shred of evidence that he was anything less than sincere in his work. This must be understood if you want to know what he taught, and whether or not it's true.

Feast Upon The Word blog publishes commentary on each chapter studied in Priesthood quorum and Relief Society. They recently wrote their testimony of Joseph Smith, of which I can relate. I here share it:


Joseph Smith fascinates and bewilders me. I find his writings and his teachings infinitely fascinating, immensely instructive, and theologically rich. I love his life, and especially his own, always-changing interpretation of his own experiences. I am enthralled by the translations and revelations he left us—even the non-canonical works like the (original manuscripts of the) New Translation, etc. I am particularly moved by his expansive “Nauvoo theology,” by its implicit and explicit angelology, doctrine of keys, notion of deification, way of conceiving of the divine council, implications in terms of the unique role of Adam, and so on. I feel a kinship with Joseph in terms of his love of learning, his bewitchment by ancient languages, his willingness to venture into the unexplored. And I find myself wishing that I could have walked with him and Zion’s Camp to Missouri, that I could have strolled through New York City with him during his first visit there, that I could have sat in the crowds in Philadelphia and Washington, D.C., after he had escaped from prison, that I could have listened to him preach in the Kirtland Temple, that I could have pulled sticks with him in Nauvoo, that I could have sat at table with him in Zion, that I could have wept with him over the difficulties polygamy introduced into the otherwise happy climate of Nauvoo, that I could have laid by his side in prison, and so on and so on.

I love Joseph Smith. And I love what he’s left us. I believe without reserve that he held and holds the keys of the last dispensation, that his teachings were and are true, that the scriptures he left us should be our bread and our butter every day. I hope and give myself to the hope that his visions and revelations and teachings will yet revolutionized the whole world as he hoped they would. And I want, in whatever charity God grants me, to see absolutely everyone have a chance to learn of Joseph’s works and teachings, of the keys and revelations he received.

The work, I believe, is true.