Showing posts from September, 2009
Show all

A Look at Self Betrayal

I've come to the conclusion that we, at least I, betray myself almost everyday. I reached this conclusion after reading through a series of posts at the LDSPhilosopher blog named "Two Ways of Being". This series looks at the way we betray ourselves by looking at others as objects, rather than human beings. The series and post introductions can be found here. An excerpt:
According to the book Anatomy of Peace, the Jewish philosopher Martin Buber
observed that there are basically two ways of being in the world: we can be in the world seeing others as people or we can be in the world seeing others as objects. He called the first way of being the I-Thou way and the second the I-It way, and he argued that we are always, in every moment, being either I-Thou or I-It—seeing others as people or seeing them as objects.
In other words, Buber believed that human experience oscillates between two different kinds of relationships: “I-Thou” and “I-It.” We sometimes experience others as ob…
Post a Comment
Read more 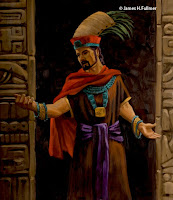 Nathan Richardson at LDSPhilosopher.com has done a great job analyzing the philosophy of the antichrist Korihor, and Alma's response in unraveling it, in the 30th chapter of the Book of Alma, in the Book of Mormon. It consists of 3 parts, introductions of each can be found here. An excerpt:
While teaching among the Nephites, Korihor lays out a variety of complaints he has about the doctrines taught in the Church of Christ. He asserts that there is no life after death, that guilt is caused by a frenzied mind rather than a conscience, and that prophecies are just foolish traditions.

Alma could have taken the same shotgun approach that Korihor used, peppering Korihor with detailed counter-arguments to each of his assertions. The first time I read Alma 30, that is what I was expecting, or at least hoping for. I thought, “Alma could explain near-death-experiences as evidence of life after death,” or, “Maybe he’ll talk about ‘Natural Law’ or what C. S. Lewis calls ‘the Tao’ as evidence t…
Post a Comment
Read more

Mormonism and The Cross 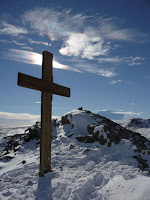 I've discovered an interesting website dedicated to "interreligious dialogue and discussion with Latter-day Saints, Evangelicals, and Catholics." It goes by the name of Summa Theologica, which is the title of a work by the Italian Catholic philosopher Thomas Aquinas. Their latest article is on Mormonism's relationship to the Cross, that is as an ornamental symbol. The author does a great job looking at the history and giving advice on how to approach those wondering why they don't see Mormons wearing crosses or crosses on our meetinghouses. An excerpt:
What all of this [history of the cross in Mormonism] tells me is that there is often a very unfortunate result when we feel compelled to make up some sort of explanation for why we are different from someone else that has no basis in history. To point out that Latter-day Saints do not use a particular symbol in the same way as other religions is not an explanation but merely an observation. In addition, a Latter-day…
Post a Comment
Read more

Mormons and the Bible

By Skyler J. Collins September 09, 2009
I sent the following letter to the editor of the Dallas Morning News today:
9 September, 2009

Re: "On teaching the Bible: Equal time for other texts," Mr. Fisk seems to be under the impression that Mormons would have a problem with study devoted to the King James version of the Holy Bible. Let it be known, Mormons believe the KJV Holy Bible to be the word of God, just as any other type of Christian. The Encyclopedia of Mormonism's entry regarding the Holy Bible can be found here: http://eom.byu.edu/index.php/Bible.