Non-Aggression and The Constitution 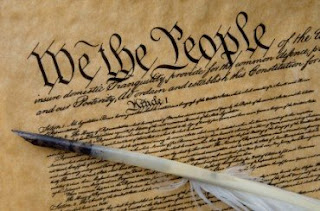 My highest aim in life is to be on the side of truth, wherever it can be found. I believe this is synonymous with being on the side of God. For that, I have journeyed down several paths in search of truth in such areas as faith, science, economics, and politics. Truth in each cannot contradict truth in the others. Any seeming contradictions are because of either incomplete information or incorrect interpretation of the available information.

Along this journey, I have found true and just such libertarian principles as self-government, self-ownership, and non-aggression. I understand what each of these principles are, I try to live them, and I try to promote them. But I've certainly had some questions along the way as these principles pertain to the Gospel of Jesus Christ.

Within the Gospel, it is doctrine that the American Experiment was directed and established through either the direct or indirect influence of the Almighty. What this means is that God had a hand in the initial establishment of the Federal Government of the United States. How does this bode among Latter-day Saint libertarians?

As a libertarian, I believe the non-aggression principle is true and just. So how do I also accept that God had a hand in establishing the Constitution and Federal Government of the United States? To answer that, let's look to Jerusalem.

In the Book of Mormon, the First Book of Nephi, Chapter 4, we read:

And it came to pass that I was constrained by the Spirit that I should kill Laban; but I said in my heart: Never at any time have I shed the blood of man. And I shrunk and would that I might not slay him. And the Spirit said unto me again: Behold the Lord hath delivered him into thy hands. Yea, and I also knew that he had sought to take away mine own life; yea, and he would not hearken unto the commandments of the Lord; and he also had taken away our property... And again, I knew that the Lord had delivered Laban into my hands for this cause—that I might obtain the records according to his commandments. Therefore I did obey the voice of the Spirit, and took Laban by the hair of the head, and I smote off his head with his own sword.

Imagine if you will a third-party libertarian observer to this event. What would be quickly concluded is that Nephi murdered a drunk Laban. He afforded him no due process and took the place of judge, jury, and executioner. Nephi has here violated the non-aggression principle. Any third-party libertarian observer would be correct in condemning Nephi and bringing him to justice. As a libertarian, I would support that end. So how was what he did okay? And how can I accept his actions were truly just and be a libertarian at the same time?

The answer is that I believe that God commanded Nephi to slay Laban. Even though it violated libertarian principle, because it was commanded of God, it is just. Do you see the paradox? As a libertarian, I must oppose initiatory aggression in all it's forms. But under the will of God, libertarian principle must take a back seat for those who've had a spiritual witness. With that witness, it would be unjust for me to condemn Nephi, however, without that witness, it would be unjust for me to disregard the non-aggression principle. We are only accountable to God under the law that we have received, after all.

How does this apply to the Constitution and the limited Federal Government that it established? Under libertarian principle, the Constitution and Federal Government are unjust and illegitimate, but insomuch as both were established by the will of God, they are just. This means that as both a libertarian and a Latter-day Saint, I can only justly defend the Constitution and it's limited government within that sphere. What initially seemed like contradicting truths, after a little thought and a little study, it seems the contradiction was of my own creation. I can now promote the principles of libertarianism as true and just, and also accept the will of God.